A season of hard work has paid of for the UTS club with UTS being named Champion Club for 2012. Full details of the results can be found on the SVNSW SVL page.
A set of pictures from the day have also been posted on the SVNSW Facebook page.

Thanks to Briianka (& Gus & the various babysitters) for running the competition.

Congrats to everyone on a great season! 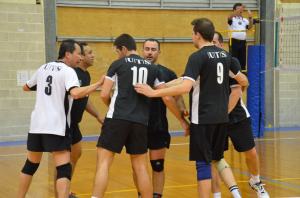 Mens Div 1 Team Update (by George)
Semi Final Update: After finishing the 10 week regular round robin competition in 3rd place, we played off against BHV Khalsa in the 1st Semi-Final. We started off on fire taking the first set 25:20 much to the surprise of Khalsa, and followed up with another one-sided affair in the 2nd set winning 25:18. The 3rd set was a complete turnaround with a lot of errors on our part allowing Khalsa to win 25:20, and in the fourth we just couldn’t regroup whilst our opposition seemed to dominate across all areas of play to take the set 25:18 to level the set scores. The 5th set was a tough ask for us as we just couldn’t stop the momentum of Khalsa who led at the changeover and continued their great form to win the fifth set 15:7, and take out the win overall. The match was very disappointing to us all and the loss means we now will play off for the Bronze Medal against BHV Brumbies next week. Its always tough to loose a match when you are 2 sets up, but hopefully we will take some lessons away heading into our final match of the competition. Semi-Final Result: BHV-K def UTS2 3:2 (M1 Gold Medal Match: BHV-K v UNSW)
Bronze Medal Update:Our team played off for the Bronze Medal against Baulkham Hills Brumbies, who had previously beaten us in the preliminary rounds. We had an almost full squad which gave Coach Marielle plenty of options and we were able to dominate for the majority of the match. We won in 3 straight sets, 26:24, 25:17, 25:22 thanks to some great passing from our back row and perfect setting by our alternating setters, Lucas and Michael. Everything seemed to work and we all all enjoyed a fitting end to our SVL ‘rookie’ season in Div 1, as we walked away with the Bronze Medal. Bronze Medal Final Result: UTS2 def BHV-Brumbies 3:0 and UTS2 takes 2012 SVL Div 1 Men 3rd place. Note: The Gold Medal was won by BHV-Khalsa who defeated UNSW 3:2 in a close 5-set decider.

Junior Team Update (from Nam)
The league season finished off with some very exciting matches for our Junior Team. 3 Junior teams played off in bronze medal matches and 1 team in a gold medal match. The U15’s team easily beat Sydney North to win the Junior Division 2 bronze medal in straight sets. The U17’s struggled in the first set but found their rhythm to win the next 3 sets of the Junior Division 1 bronze medal match. In the Open Women’s Division 1, UTS Santa Sabina played Manly Volleyball Association. This is the first time that a Santa team has ever qualified into an Open Senior Women’s competition finals series. After a slow start in the first set, the team managed to catch up but narrowly lost the first set 23-25. However from that point on, the girls dominated at the net and won the following 3 sets to the win bronze medal comfortably. The gold medal match of the Junior Division 2 was an epic battle that went the full 5 sets. After 2 sets all, our U16’s team trailed behind Baulkham Hills High throughout the 5th deciding set. At 14-11 down with 3 match points against them, the girls dug deep and clawed their way back to level the score. Solid serving from Ailish Power and Montana Meucci, with aggressive plays at the net from rookie player Emily Devine secured the gold medal winning 17-15 in the end!

This entry was posted on Wednesday, September 26th, 2012 at 2:04 am and is filed under Results. You can follow any responses to this entry through the RSS 2.0 feed. You can leave a response, or trackback from your own site.