September will be a big month for volleyball for UTS.

On the 6-8th a bunch of nearly 30 supporters made their way down to Canberra for the World Championship Qualifier event featuring our own VolleyRoos, Kazakhstan, Thailand and Kuwait.
After 3 days and 6 great games of volleyball, the VolleyRoos come out on top winning all 3 of their games and booking their spot at the World Championships in Poland.
We could claim this was in no small part due to the rather noisy (both visually and audibly) support of the UTS Onesie Roos (official supporter name still to be copyrighted) . 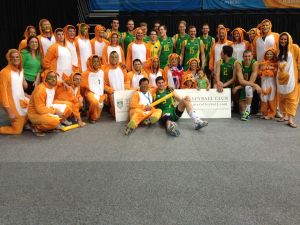 Saturday the 14th will see the first game of the 2014 Australian Volleyball League season for the UTSSU guys against the Australian Institute of Sport (AIS).  The game starts at 2:30pm at the UTS Multi-Sports Hall, 745 Harris Street.  Should be a good game so get along and support the guys.

Sunday the 15th will see the semi finals and the following Sunday the grand finals.   Games will be at Homebush Sports Halls as usual.  UTS teams will be in action throughout the day in most all divisions so lots of chances to cheer on your teammates.

This entry was posted on Wednesday, September 11th, 2013 at 11:39 pm and is filed under News. You can follow any responses to this entry through the RSS 2.0 feed. You can leave a response, or trackback from your own site.