For what seems to be the first time, NSW Volleyball took a squad of 13 pairings to compete at the annual AJBVC in Glenelg. Arriving 2 days earlier to prepare for the distinctive weather conditions that Adelaide had to offer, we admired the abilities of Australia’s’ greatest beach volleyballers competing in the finals of the Renault National Tour. Just watching the two gold medal matches proved to be a tough endeavor as we sat there with our free melting movenpick ice creams under whatever shade we could steal from the person next to us. However, with the temperature rising into the high 30s, it was essential for a quick dip in the water after every serving of ice cream we could manage to get.

Moving on to our accommodation, a bunkhouse set in a holiday park on West Beach provided for an action packed venue for card games and no tennis. Mainly so that we could focus on the sport we travelled to play. Nevertheless, Adelaide ashored us that sleepless night would be well ahead of us as the fans that sounded like a mix between a kid clicking away at an all night game of counterstrike on his computer and higher pitched sighs from what seemed to be a woman’s voice. In addition, once Mr. Jones figured that all the fans must have been switched to the winter setting, we rogered what he said and had much cooler nights. The only other problem everyone seemed to have from the bunkhouse was the lurking smell from the boardwalk to the kitchen. It initially started on the first day we arrived after Nam and I picked up the groceries from the Woolworths delivery. After dropping them off at the communal tables outside our room, I think Nam dropped something… wet, in addition to the groceries, that probably lingered and worsened in smell as the days went on. Besides all that, it was actually fantastic being located just next door to everyone else in the NSW squad as it not only brought upon a team vibe amongst everyone, but there was no hesitation in support between pairings when one pair had a games break. Especially when going for a quick dip and swimming around the pier a day after a shark siting, it was great having someone else’s support reassuring you that there were no sharks, even though I lurked beneath grabbing the feet of the overtly nervous Michelle Slack-Smith and 13-15 y.o girls. Regardless, that set up for accommodation is what I look forward to again.

Moving onto the championships itself, our pre-tournament was cancelled do to the clash of organisation between the national Tour and Volleyball SA. It was probably better not to play as there were no restrictions about play in the heat for that tournament. Starting off on the Monday, earlier than expected due to the heat (wake-up 5:15am, game 6:30am) 5 NSW teams ventured over to the beach and won four of those five matches. A bit of a difference to the first day of National juniors for indoor where every NSW team lost their first match. Anyway, due to the heat, games were reduced to first to 15 points each set with first to 12 in the third. At 6:00 am that day the temperature was already 29 degrees. By 9:30am the temperature had risen to 35 degrees and all current games were completed and play was stopped until 6:00pm when the temperature had cooled. For the next three days of competition, all games started at 6:00am which meant for NSW players playing in the first or second timeslot, a 4:45am wake up call was needed. To worsen things, games were reduced to first to 12 points in the first two sets then first to 9 in the third as games were going overtime from the Monday and the organisers could not fit in all available times due to the heat restrictions. This also meant play would cease around 9:30-9:45 when spectators or players for that reason could no longer see the ball and air swings on serves became a common occurrence.

For my own pairing with Brad Wall, a beach player from Manly, this meant the earliest wake up call for each day, including the last day after we didn’t make playoffs so that we could support the other teams. In a slightly delusional state (due to the lack of sleep, around 5 hours each night after I overcame the heat of my bed) everything became funny, even Nam farting on me. It was a shame though when NSW only had 1 team in a medal playoff after 3 pairings were knocked out the day before in essential quarterfinals. However, Mariafe and Nikki won the Gold in the u/23s women division. Well done girls!

Overall, it was an extremely enjoyable week, and probably my favourite trip behind indoor junior nationals Perth 2010. And in a week where the playing time for beach volleyball was reduced due to Adelaide being the Hottest City on earth 16th January, the organisational end of the trip definitely made it so much more than what it could have been so it is much appreciated by myself and all other NSW squad members to Michelle Slack-Smith, Nam Pham, Lucas Carroll, Roger Jones, Marcos (Baghdatis), Caitlin Cockburn, Gareth Mann and Dieter Rokhamper.

Also a special recap of all NSW teams performances throughout the week: 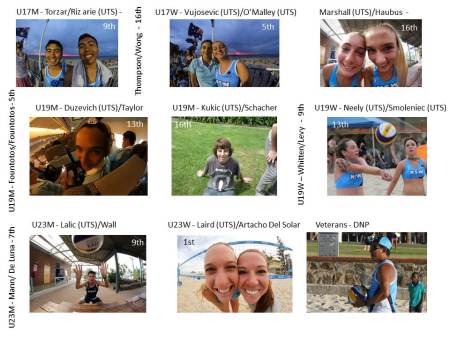 Also, I wish all the best to Nikki Laird. A former UTS club member whom was selected as part of the AIS alongside partner Mariafe. Both these girls will be playing on the Renault National tour over the next month and have currently lost the first two events in the quarterfinals. They will be playing in the NSW event at Cronulla on the 28 February – 2 March and any support goes a long way!!

Lastly I will leave you with one quick tip. PLAY BEACH!

This entry was posted on Sunday, February 9th, 2014 at 11:02 am and is filed under News. You can follow any responses to this entry through the RSS 2.0 feed. You can leave a response, or trackback from your own site.