Week 8 of SVL saw byes for the Men’s Honours teams as well a Mens Divs 2 and the U19m….

Womens Div 1 (from Sucky)
A double header for us meant we had a busy day… After a slow (or too early… depending on how you look at it) start we came back against ISCV after loosing the first set.  Not great volleyball from us, but a win is a win.
After some quick lunch and a duty, our second game against USYD started much better. Although we dropped the second set, we played some really good volleyball in the 3rd and eventually won the game in 4.
Another couple of important games coming up for us next week with another double header… Good thing we love our volleyball! 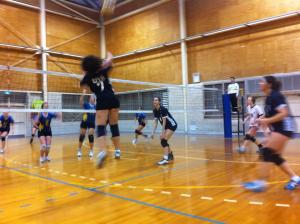 Ornella getting it done on the outside

Women’s Honours (from Anna)
A quick recap of the last few weeks – We played Manly [for the second time in 3 weeks] and lost 3-0, Nam chucked a tanty and was seen storming out of the stadium, an awkward team silence followed and we all went home to wallow in our sadness. – We played Dragons [for the second time in 3 weeks] knowing we had to improve on our previous game. Our blocking significantly improved and Clara played some incredible defence for us to come out with the win 3-1, Nam even stayed for the final team chat!! Arriving at SVL today, no one seems to be able to explain why we are playing Manly for the 3rd time in 5 weeks?? I’m going to fast forward to set #3 as there is not much to be said about the first two, I was always taught by my wise mother “if you don’t have something nice to say, don’t say anything at all”. Down 2 sets, we knew we had to fight to get back into the game. With serve receive improving and finding the connection with the hitters, we began to play much more aggressively and really find the angles around the strong Manly block, with some great swings from Irina from the Outside. Winning set 3, and with some great tough line serving we went on to win the 4th and knew we had the momentum to win the game. Getting a good start in the 5th we concentrating on keeping our defence and block system solid and swinging high and early staying aggressive. Finishing up with a win in 5, it was certainly and impressive turnaround after our shaky start, and proves that we can really be competitive and dominant against the top teams in this division. Happy birthday Wendo and Nammy! Hope the win was a good present from us all

This entry was posted on Monday, August 4th, 2014 at 11:10 pm and is filed under News. You can follow any responses to this entry through the RSS 2.0 feed. You can leave a response, or trackback from your own site.